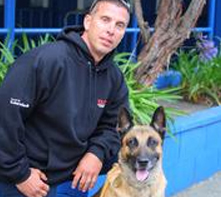 ​Gregg has been involved in police dog training for twenty five years. He has handled four different dogs as a police K-9 handler and has been a K-9 Sergeant and a K-9 Lieutenant. He has been a SWAT team member, SWAT team leader and a Tactical Commander.

Gregg has had the opportunity to train with the Dutch police as well as numerous KNPV clubs throughout the Netherlands. Gregg has taught classes on marker training and the importance of positive reinforcement at K-9 Conferences across the country.

Gregg has trained dogs for over sixteen law enforcement agencies throughout Northern California. He is a certifying official for P.O.S.T. (Peace Officers Standards and Training). In addition, Gregg is a Judge and certifying official for W.S.P.C.A. (Western States Police Canine Association). Gregg has been recognized as a subject matter expert and was selected as a consultant for P.O.S.T. for the newly revised State of California K-9 Evaluation guidelines.

For more information refer to Resume below:

This website uses cookies to improve your experience while you navigate through the website. Out of these, the cookies that are categorized as necessary are stored on your browser as they are essential for the working of basic functionalities of the website. We also use third-party cookies that help us analyze and understand how you use this website. These cookies will be stored in your browser only with your consent. You also have the option to opt-out of these cookies. But opting out of some of these cookies may affect your browsing experience.
Necessary Always Enabled
Necessary cookies are absolutely essential for the website to function properly. This category only includes cookies that ensures basic functionalities and security features of the website. These cookies do not store any personal information.
Non-necessary
Any cookies that may not be particularly necessary for the website to function and is used specifically to collect user personal data via analytics, ads, other embedded contents are termed as non-necessary cookies. It is mandatory to procure user consent prior to running these cookies on your website.
SAVE & ACCEPT